This week’s events took place during midterm week (hence why this post is so delayed). A few friends and I hunkered down in our nearby study center for most of the week to prepare. At home we would have likely gathered in a friend’s apartment or in Theta, but in Spain an at-home setting like that is not an option. In Spain, it is fairly raro to invite someone, even a friend, into your home. Whether it comes to arranging a study group or just wanting to hang out, such gatherings take place in common spaces. Thanks to our hard work and diligence, we did well on the tests and were able to enjoy our weekend excursions. 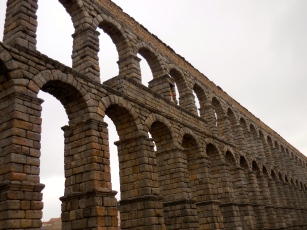 Three (out of four) midterms in one week?! What were you thinking, USC? But how quickly our frustrations dissolved once USC took us on another great tour of Spain to see Segovia, Salamanca and Ávila. This weekend was originally just scheduled as a day-trip to Segovia, but an extension was offered. How could I turn down the chance to see more of Spain? (Read: Yes! Two free nights in a 4-star hotel!)

Our first stop was Segovia where we 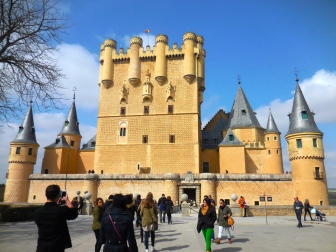 saw the Roman aqueduct (above) that was built in 1 C.E. ¡Qué antiguo! From the aqueduct we toured the city and saw colorful buildings and cathedrals with patterned walls. The stucco of the building in Segovia was often detailed with geometric patterns. I’ve never seen anything like it.

We then made our way to El Alcazar (right), a castle built most likely built around the 12th century. This castle, rumored to have inspired Walt Disney’s Cinderella Castle, looked like it fell from the pages of a fairytale. 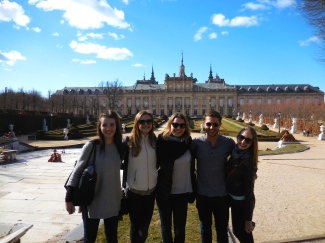 It was then on to La Granja. King Philip V of Spain designed it after his grandfather, Louis XIV’s, Versailles – hence this palace’s apodo, The Spanish Versailles. This palace was constructed on the cusp of the French Rococo and had definite French elements in its colorful interior decor and swirling fountains and gardens.

It was from Segovia that some of the group departed and the rest of us headed to Salamanca. We checked into our hotel and completed a brief evening walking tour of the city. I was enchanted by Salamanca’s plaza mayor. The plaza, like Salamanca, was smaller that others that I’d seen, but the buildings were warmly lit and it was 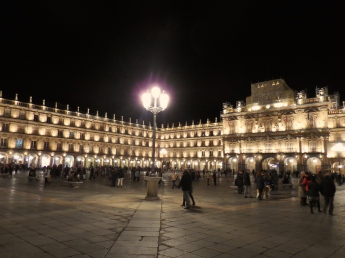 buzzing with people. It is my favorite plaza mayor so far. We enjoyed dinner at Meson Cervantes, which overlooked Plaza Mayor.

Day Two began with a hotel breakfast followed by a visit to Salamanca’s cathedral(s). Some say there are two cathedrals, others one. That is because a new cathedral was built adjacent to an old one with the intention of razing the old one. That was a common practice, but the old one was never knocked down. Now the two are connected. We also walked through original campus of La Universidad de Salamanca, the oldest university in Spain. 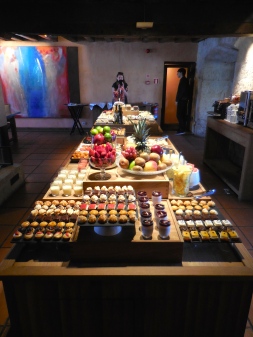 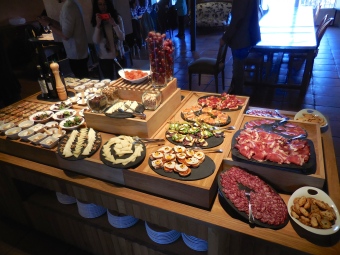 From there we hopped in the bus and drove to Hacienda Zorita. This place was espectacular! We enjoyed a stellar lunch with the most delicious and gourmet tapas and small plates. We then explored the grounds, which are home to a hotel, spa and winery. 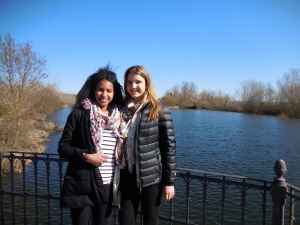 My friend Austin and I took a picture in front of El Río Tormes. This river is mentioned in the classic Spanish picaresco novel, Lazarillo de Tormes (which we’ve each read 247 veces). Austin and I have had several Spanish classes together so seeing this river in real life was a big deal for two Spanish majors.

We then headed to the Hacienda’s bodega where we completed a wine, cheese and olive oil tasting. As most of you know, I am not a wino, or any sort of alcohol-o for that matter, but I did enjoy my first wine tasting experience. We sampled two glasses of vino tinto and one vino blanco. The white wine we had won the title of best white wine in the world of 2011.

Haven’t been wine tasting? Here’s what you do: 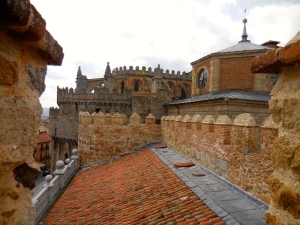 The next morning, exhausted, we dragged our feet to the weekend’s third destination: Ávila. In Ávila we saw the famous muralla. This medieval wall is the only wall in Spain that is still complete. Many medieval cities built walls around the city as a means of protection, but knocked them down to expand. In Ávila’s case, instead of knocking down it down, they built outside the wall. Then and now, the city inside and outside the wall is equally as important.

For lunch we went to Restaurante Alcaravea. Our program director said this restaurant had the best steak in Spain. The steak was tender and flavorful and oh so filling! I don’t know if I’ve ever had steak as a lunch entrée. In Spain, lunch is typically the heaviest and largest meal of the day. Yes. Yes it is.

Soon enough I was back in Madrid. My Sunday afternoon was free of any responsibility so I took the time to reflect on my great Spanish weekend and watch Amigos. What a whirlwind three days! Thanks, USC!