With roughly one month left in Madrid, it’s about time I had some visitors! The more I thought about it, the more OK I was about having friends and family come later in the semester. Had they come earlier, I would not have known as much about Madrid and it would have been harder for me once they left since I knew there would  still be so much time before I saw them again.

My calendar was now teeming with the arrivals and departures of friends and family as they passed through Spain’s capital. Even before my parents, Nick and Courtney were to arrive next month, I had the pleasure of showing around Ellie, my lovely aunts Karen and Cathy, and my other friend, Allison. Stay tuned for upcoming posts detailing my highlights with each of them: 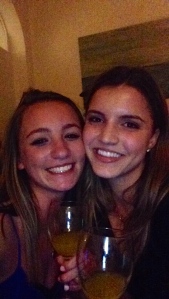 Ellie arrived in Madrid just one day before I left for Morocco. Despite our short amount of time together, we still did a whole heck of a lot. Ellie and I first met for dinner with her friend from home, Cristina, who was studying in Madrid for the year. The three of us met at Mercado de San Ildefonso. We enjoyed yummy burgers and I introduced Ellie to Tinto de Verano. That night it began to pour, so we made our best efforts to stay dry. We took shelter in Chocolatería San Gines. Our bellies full of chocolate and churros, Ellie and I bid farewell to Cristina and met up with some other USC pals. Ellie was such a great host to me in London that I felt obligated to show her the best time possible in Madrid, despite having less than 48 hours together. Moving down the Madrid must-see/must-do list, we swung by the club most popular on miércoles before retiring for the evening.

The next morning, Ellie, our friend Scott from USC/London and I grabbed brunch at Federal, known for its scrumptious brunches. The three of us then walked through Plaza de Espana and made our way to the Palacio Real. I visited the Royal Palace with my paren

ts in 2012, but it was my first and only time there this semester. The three of us then made the obligatory trip to Retiro where we stumbled upon a new exhibition in the Palacio de Cristal. The inside of the Crystal Palace had been transformed into a Moroccan tent complete with colorful fabric swatches, carpets and cushions. It was the perfect teaser for my upcoming trip to Morocco. (Ellie was headed there the following week.)

Since I was leaving for Morocco that day, I knew I was going to miss dinner, but didn’t want to travel on an empty stomach. I felt my tour guiding skills fell short when it came to restaurant selections. Living in a homestay, I hadn’t needed to go out for meals often and when I did, other friends usually chose the place. Unable to think of an appealing and affordable option in Barrio de Salamanca, we settled for VIPs, but it didn’t

My bag was already packed for Morocco, but I needed to swing by the apartment to grab it. I texted Gloria to see if it was okay if Ellie and Scott came with me so they could see where I was living and if they could meet her, too. I was so happy that she said yes. Gloria loved meeting my friends. She talked to them in Spanish and they told me they understood about 60% of what she said. Even though they didn’t catch every word, they felt her warmth and bubbly personality 100%.

I gave Gloria the standard double kiss goodbye and walked Ellie and Scott to the metro, telling them how to get home. This was the fourth European city in which Ellie and I were together: Amsterdam, London, Berlin and now Madrid!  It was a short, but sweet time with them in Madrid.

One thought on “Mi primera visitante – My First Visitor”