So soon after I received my acceptance into the USC Madrid program, my aunts Karen and Cathy and I began discussing dates for their visit. How lucky am I to have aunts who will fly across the world to see me during my semester abroad? Once the dates were set, I could hardly wait. They were to be my first family members to visit me!

They arrived to Madrid the day I returned from Morocco. I was familiar with their hotel, Hotel Wellington, as it was where they stayed when visiting Nick (and it was just next door to one of my favorite clubs). I walked by it earlier in the week just to confirm its location and its lugar could

not have been better! It was in the heart of Salamanca and a walk less than five minutes from my apartment!

Moments after returning from Morocco, I changed clothes, brushed off any excess desert sand and pretty much ran all the way down Calle de Alcalá to one of Madrid’s nicest hotels. I zipped through the revolving door and practically flew up the stairs to the landing where they were waiting. It was so gr

eat to give each of them a giant hug! After a long and slightly teary embrace, we sat in the hotel’s lounge to charlar, catch up and plan out our first evening together.

We chose a restaurant called Alkalde for dinner. We shared wine, tapas and as many stories as we could. After a long day of traveling for all of us, we called it a night and I walked home in the warm evening air. Did I mention spring finally found its way to Madrid? Following instructions from my aunts, I texted them once I arrived back at Gloria’s.

The following day we made plans to meet at the Instituto and grab lunch together. Having been to my school when Nick was a student there, they knew where to go. Together we walked my route home toward Salamanca. Since it was Monday, that meant Euromania at 100 Montaditos, which meant 1 euro and 0,50 euro sandwiches! We shared a few platters of bocadillos before heading to meet Gloria.

Gloria was so excited to have visitors and my aunts’

Spanish impressed us all. I gave them a tour of my home, showed them my little pink room and then all of us chatted in the main room. My aunts brought some treats from La Mallorquina as a hostess gift to Gloria so we all enjoyed those. Over the past few months I’ve been gathering hints that Gloria used to be some sort of socialite. Though my suspicions were never confirmed, the stories and

photos she shared with us about her associations with the royal family, her homes in the mountains and by the beach, her handsome pareja, and her participation in las ferías of various cities, pretty much gave it away.

Before Gloria’s son passed away, she said she had more than 40 flamenco dresses and shawls. She got rid of most, but kept a few and she

decided to bring them out and dress up Aunt Karen. Tía K was very patient as Gloria placed hats, shawls, earrings and flowers on her as if she were a life-size muñeca.

The following day, mis tías dropped of their maletas at my apartment because they were traveling north to San Sebastián and didn’t want to travel with all their luggage.

When they returned from the north of Spain the next weekend, we enjoyed a delicious dinner at Quintin. Following the scrumptious dinner, we returned to their hotel to FaceTime with my abuelos! My abuelo was so cute when he said “I love this magic machine,” referring to the iPad via which we were communicating. But it’s true! Technology has come so far! It was great to catch up with my Grandma and Grandpa.

On the night before my aunts’ departure, we enjoyed some postres at VIPs and reflected on our favorite times during their stay in Spain. The next day, I headed to their hotel one last time to say goodbye. It was hard to say adiós, but my parents, Nick and Courtney were set to arrive in a little more than one week. I am so thankful my aunts visited me in Madrid. They have always been so involved and interested in what I’m 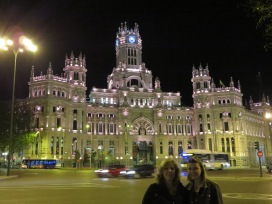 doing, so I was so happy to be able to share my time in Madrid with them, too. How lucky am I! I will never forget their visit.